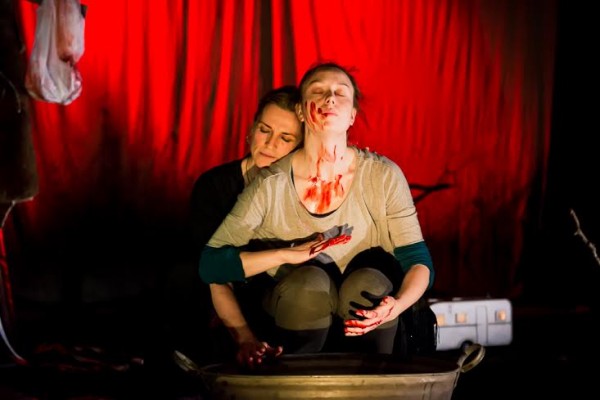 The projected silhouette of a caravan looms large over proceedings in Our Big Land, underscoring both its idolisation by the community and its inherently less positive symbolism in the wider world. It encapsulates the Romany ideal of freedom as articulated by Oceania (Robyn Moore) – it’s important to have wheels, even if you don’t use them. However its reality is much smaller, as a tiny but fiercely lit model of a caravan sits unacknowledged by the performers for the entire piece; the diminishing, tenacious truth of their way of life.

Dan Allum’s piece follows on from his work for radio on Atching Tan and Carmen, both of which worked with members of the Romany and Traveller community, and actors of Romany descent. The first interesting thing to note about Our Big Land is that it does not do so – the cast being relatively well known and having come up through established drama schools. The production is, it would appear, a statement of purpose in moving on to tell a story about Romany people and not by Romany people. Here, perhaps, storytelling supersedes authenticity.

Playing out on a circle of dirt that feels ever increasingly more like a pen than free (or big) land, we see local girl Sophie (Scarlett Brookes) become fascinated by the Romany family living in the woods and eventually fall in love with the son, Roman (Samuel Edward-Cook). The physicality of their interactions is often troubling and it is unclear who, if anyone, we as an audience are supposed to latch on to. As Oceania weaves magic tales of Romany tradition, Sophie openly mocks them. As a child, Roman beats and pummels Sophie into submission; coating her uncomfortably in the dirt that he and Oceania feel so at home upon. There is an overarching feeling that Sophie never fully chooses the life she ends up with, but that she has been drawn inexorably into its web by Oceania’s own desperate strength of will. The latter is both tough and ephemeral; an unfaltering believer in her way of life and her family’s responsibility to carry it on, no matter the cost.

The Romany language darts in and out of the performance – bursting forth in arguments and keening in haunting songs of loss and desperation; forever reminding us that we are implacably alien to this world and incapable of understanding in its totality that which we are party to the destruction of. No illusions of theatricality are utilised – the cast clamber in and out of costume on stage, set up scenes and build barricades before us against the coming bulldozers without framing them as scene changes. Here the only magic is Romany magic, and we must believe that it is real.

Our Big Land is difficult – it doesn’t offer you an easy way in and doesn’t permit to you linger when you feel you may have gotten there, cutting off after a mere 60 minutes. Sophie is at first mocking, then repressed, Oceania inscrutably fierce and Roman irreconcilably yet somehow unsympathetically trapped between worlds. Perhaps this impenetrability, this impossibility of harmony is the purpose of the piece; an entire way of life is fading and it is only possible to look on, frantically trying to determine a side to align with.

This is a culture impossibly incompatible with modern life and capitalist progress; where land is money, time is god and Dale Farm was a battle lost in the court of public opinion before it even began. It cannot be preserved in a museum, it cannot be fenced off for safe keeping, it can only fight tooth and nail for its blood, for the bauro diklo, for the caravan in the forest. We do not know it and we are not meant to; Allum feels no need to render it more accessible and smooth over the rough edges to prove its right to survive.

It feels necessary, somehow; the documentation of an existence that has otherwise only been passed down in oral tradition and noted in part by visiting scholars. Searching online for ‘bauro diklo’, the storytelling shawl passed from generation to generation, yields only results relating to Our Big Land; was it a term created to symbolise the handing down of Romany heritage and underline the power of Oceania’s stories or is there really so little known about this cultural element that this marks its first instance of mention in the wider world? That it is impossible to determine, with access only to the internet as a threadbare source of information about Romany traditions, is telling in itself.