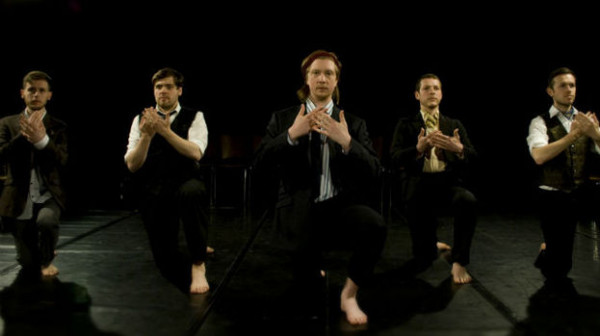 Sometimes I feel compelled to acknowledge the weight of my own expectation.

I couldn’t make it to Edinburgh this year. At first I ignored the coverage – the sting of knowing what I was missing seemed, initially, too much – but slowly, gradually it became apparent that a conversation was happening. Phrases like ‘masculinity in crisis’ and ‘male identity’ peppered my timeline. Ah – I thought we were doing feminism this year? No matter; who needs trends?!  I followed conversations about Chris Goode’s Men in the Cities and Kim Noble’s new piece at the Traverse with a sort of distracted fascination and, towards the end of the Fringe, Wuthering Heights began to pique my curiosity.

Come September, rolling up to BAC seemed somewhat of a foregone conclusion, but if I arrived expecting a dissection, an exploration, an interrogation of masculinity or a retelling of the Brontë novel, what I got was… neither.

Now, how you read into and enjoy this work will I think depend almost impossibly on your current relationship with the baseline idea of masculinity actually being in crisis.Wuthering Heights won’t hand you, on a plate, a discussion about the state of ‘modern man’ – instead it takes the thoughts, feelings and experiences of its cast and folds them around the troubled and troubling archetype that is Heathcliff. AsCatherine Love points out  it is more evocative than representative of the novel, and you may feel as though you are wandering the moors, wild and alone, if you aren’t relatively familiar with its contents. Maddy Costa also has a fantastically thoughtful and detailed reply to the piece ; showing, I think, that it elicits a range of reactions. While being a response to the original text, Peter McMaster’s piece is here to simply unwrap, not dive into, some of the ideas around male identity: instead of saying “here we are, let’s talk about this”, it simply says: “here we are”.

The cast introduce each other both as actors and the parts that they will play; Heathcliff’s horse (Nick Anderson), Heathcliff (Gary Gardiner), Cathy (Murray Wason), Nelly the nanny (McMaster) and each, in turn and with increasing complexity, themselves. Scenes race, smash and career from the locker room laddishness of introducing each other as though to a sporting crowd, to the almost inevitable but no less joyous dance to Kate Bush’s now immortal lyrics and the nearly ritual element of disrobing as Wason and McMaster don their dresses to play Cathy and Nelly. An evolving tone is dizzyingly absent; instead the cacophony of available behaviours that could arguably be characterised as masculine diverge, occasionally run in marginally ever decreasing circles around the performance space, and meet again.

The role of feminine characters and characteristics is a little more challenging – the audience openly, nervously laughs at the Kate Bush dance, and at Cathy’s first outing around the room when she is flirtatiously polite to the point of parody. But she. She. That’s a problem here you see, because even in their dresses, nothing from their barely covered nakedness (a reminder of vulnerability, of our similarities, our difference?) to their physicality conveys a female character except in snatched moments of humour. The aim here is not truly to represent these women, and I think perhaps not even to represent the feminine in men.

In fact, the actual aim doesn’t feel ultimately clear. Much like the building awareness that the piece rests on a knowingly white, cisgender, heteronormative representation of masculinity (also touched on in Billy Barrett’s response), that has the luxury to prod at these ideas but to return to the world as part of the acceptable norm afterwards, so too are these more nuanced aspects of exploration slightly lost. In such moments, where Gary’s camp qualities are boorishly ridiculed and Cathy is never anything other than a man (even in a dress and albeit to be carried off possessively), the company invite you to dislike them. They challenge you to look in the face of multiple facets of male behaviour, without context, without apology. It’s part of the conceit, but it is distracting.

This all feeds into the overwhelming idea that men do not fully know how to behave. That they cannot stick to the rules; not narratively, not theatrically, not even societally. They stop, start, instruct each other, fall apart only to come together again, and sometimes just have to work it off by cavorting around. Littered with personal stories and shadowed by an increasing and unnerving inability to tell when Gary is Gary and he is Heathcliffe, Wuthering Heightswants, I think, for us to see. Not necessarily to talk, or to understand, but to see.

When Gary mutely weathers an assault of intensely personal questions about sexuality, identity, and sex; when he tries to direct each of the cast to realise the pain, loss, hope and desperation Heathcliff feels as he runs to the window for Cathy, only for them to fall away one by one as he reveals another layer of emotion; even when he clings to Cathy – in or out of the dress it doesn’t matter – we are asked to see. That to be a man is to be more than and less than and sometimes the sum of all of these parts.