Everyone loves a good story.

Last week, I saw two old friends for a drink and a catch up, and met two new people along with them. Less than 10 minutes in, we were swapping stories of nightmare flatmates we’d all had. Then we moved on to backstage horrors and production anecdotes.

Story isn’t dead, far from it. It’s all around us. It’s how we communicate. How we build new relationships and reinforce existing ones. It’s currency, but it’s art; we trade in high and low values, treasure the limited editions, the rare and the good, the highly prized. But storytelling as a skill, as a pastime, as an oral tradition, seems to be changing. Evolving perhaps…

… is a storyteller. I don’t know how he brands himself (at time of writing, I’m in a Deptford cafe with no wifi and a dead phone), but I have seen him twice now – once above a small pub somewhere in south London and again three weeks ago in Tree at the Old Vic – and both times he has told me stories.

What I couldn’t help thinking after Tree was that I hadn’t noticed… I hadn’t noticed, this time, that he was telling me a story. Every character that he and Tim Key recounted felt real; if they’d had their little walk on parts as they would in a straight play, I don’t think I would have felt any differently about them. Each was individual, each fully formed.

In Lucy Ellinson’s Grounded performance at the Gate, everyone in The Pilot’s life felt distant and fuzzy, as though we too were seeing them as pixellated specks, through drone’s eyes, some kilometres and a lifetime away. The Pilot’s life throbbed and pounded and pulsated before us – it wasn’t story for me, it was performance.

But George Brant, its writer, considers it storytelling – indeed, he goes so far as to say so in the playtext’s opening. There’s just something about Grounded… its structure, its direction, its wording, that makes it performative, the perfection with which Ellinson embodies the part that makes her an actress.

I’m fascinated by what this difference is or could be [or whether there even needs to be one], between what I think might constitute storytelling and one person performance, because it’s not quite to do with perspective, and it’s not quite to do with whether you stand still or shout or gesture or do voices, and I’m finding it difficult so I’m going to tell you a story…

When we moved into our current flat, just over a year ago, as we heaved and thumped our way up the ridiculously narrow stairs with the first of our boxes, a zimmer frame slowly made its way into view down the ground floor hallway. Followed by a head of curly grey hair, followed by strict instructions never to use the washing machine after 10pm as our kitchen was directly above her bedroom.

We nicknamed her ‘Mrs. Hudson’ within the day. Julia quickly became a fixture in our lives and was everything you could possibly ask for in a downstairs neighbour – quiet, always home in the evenings, and ragingly left wing. She kept a noticeboard in the hallway on which she was prone to writing us brilliant notes such as the one below (we had asked if she was happy for us to send back the UKIP flyers that had sullied her doorstep) and drawing us maps of the local area, marking out the laundrette and the church (we never went to either).

There was a mutual understanding between myself and my flatmate that if she ever waylaid either of us in the hallway, the other would go down and join in for company as she was prone to talking for quite a long time. Sometimes we thought maybe she was lonely, but she seemed to get out and about with friends almost every day.

Julia loved to tell stories. She had lived in our neighbourhood all her life, worked for the council for many years, and her mother had been friends with the suffragettes. We learned that the apple tree that interspersed our warm autumn evenings with the occasional BANG-thud as it dropped its fruit on the bins below was one of only two in the whole area – and a strain particular to it. That our road once belonged to the grounds of the church, now two streets away. That the fox in our back garden liked to sleep on her bedroom window ledge.

We’d smile and nod and laugh – and only sometimes appeasingly. Julia was funny. And interesting. Every few weeks, I’d think about asking her if we could sit down together, if she could tell me her stories and I could record them. I didn’t know what I wanted to do with them – I just wanted them.

But I never did. 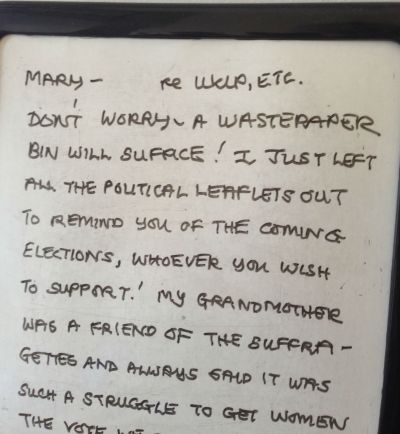 One day in October, we noticed that Julia’s post had started piling up.

Come the weekend, I couldn’t take it anymore and went to ask our next door neighbour. Julia had been rushed to hospital a few days beforehand because she couldn’t breathe properly, and her system had overloaded with carbon dioxide. She was in the high dependency unit. Only family were allowed to visit.

We sat quietly in the living room for a bit. She was the most animated, fiercely independent person we know. She’d be home soon.

And nothing, and more nothing until a car. Arrived early one morning and took away what little there had been in her flat that her family wanted to keep. Then a skip. Into which what looked like several lifetimes got piled over the course of a few days. Then emptied. And filled again. A Sainsbury’s bag of LPs slowly absorbed the rain, covers curling and warping.

And so were her stories.

And if I could I’d run backwards and grab all her friends at the door in their grief and demand their numbers, demand their memories of her over coffee and apologies. Demand to have her back in our hallway raging against Nigel Farage and the fact that we’d plugged our hoover into her power supply to clean the stairs. So that I could ask her, this time, to tell me everything she could remember. Because I’m already forgetting the stories. Forgetting her.

And that scares me.

A book I borrowed from the library when I was quite young described at one point the death of a seanchaí – an old Irish storyteller who held not just the history and law of the land, but also of the clan. He was beaten about the head and when he fell to the ground, the boy recounting the tale looked on in horror and sadness as “his brains and all his stories spilled out on the ground”. That stuck with me forever; how precious someone’s individual memories and knowledge are. It’s easy to assume that experience is shared, that nothing can quite be lost forever. There must be a backup…

So many times, I’ve started into a story, only to be interrupted by a friend. “Oh yeah, I saw your Facebook post.” “You mentioned on Twitter.” As has been pointed out, oral and digital culture share many similarities, and the ways in which we narrate our own lives so heavily online are not so far removed from the ways in which we communicate in story. But having had access to the internet for just about half of my life now (!), I can on occasion be prone to forgetting that information isn’t perpetual. That even though most of the things that happen to the technically literate of my generation have a backup of sorts, in fragments; in tweets, in pictures, in WhatsApp messages, even though we are logging everything around us all the time, from taking pictures of people sleeping on the tube to live-tweeting someone’s argument on the train, even though we are surveilled to within an inch of our lives and privacy has become a political topic, a matter of real fear… sometimes no one is watching, no one is listening, no one has taken the time to sit and write things down or to press record. Some things can just… disappear.

So yes, the crux of this is that my neighbour passed away and I miss her and her eccentricities and I know that they’re never coming back – a whole world and a life that I knew barely anything about is just gone. But, as is the way of life and of writing, things happen in threes. A week ago, the night before the start of National Storytelling Week [bet you hadn’t heard of it either?!], and a week after I had decided that I wanted to embark on an exploration of what oral storytelling is/does now, I bumped into my friend Justine at a party.

Now, Justine is a natural storyteller, and has been for as long as I’ve known her (5 years). The woman can hold a room. Of complete strangers (I’ve seen her do it). There’s something about the way she commits to it; she structures it properly, and you always feel like you’re being let in on a grand secret by the time you reach the ending. I am firmly of the belief that storytelling is simply an innate skill that she has.

But in our conversation, it turned up that Justine doesn’t remotely consider herself a creative person.

So we’re going to try something.

We’re going to spend some time exploring story and the art of telling; one which, interestingly, the designated arts community don’t seem to be the gatekeepers of.

I’m going to get all the willing volunteers I can get hold of* to tell me the same well-known story, to see how it differs and evolves depending on each person’s experience/memory of alternate versions.

We’re going to a storytelling night to hear people who tell them for the hell and the joy of it, and we’re hopefully going to speak to someone who does so for a living.

Partly, I want to sort out my own idea of what it is that makes storytelling different, or whether I’m kidding myself that it is or needs to be. I’m hoping we’ll emerge with a slightly better understanding of oral storytelling culture, how it’s merging with online and podcasts, and how/if it’s changed.

I’m certain we’ll end up with a tale to tell – and maybe both be braver in the telling.

*If you would like to be a willing volunteer, please give me a shout on @maryhalton. I will buy you tea and cake, which you deserve for reading this far anyway.

One thought on “Tell Them Stories”