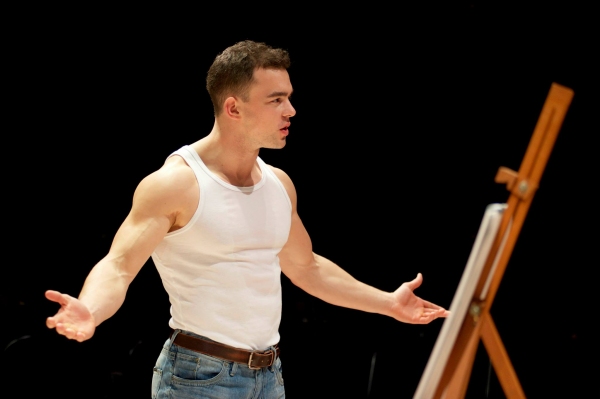 Director James Whale (Ian Gelder) doesn’t create monsters anymore; he fights them. After a series of strokes, the jagged forks of lightning that once rent the skies in Frankenstein now pulse through his nervous system, snagging on words and memories, and he lives in quiet frustration with his mothering and brilliantly acerbic maid, Maria (Lachele Carl).

Punctuated by visits from attractive young men, this really is the thrust of Gods & Monsters which, for the most part, quietly unfurls at its own pace, relying heavily on the guiding hand of Gelder’s performance, which certainly does not disappoint. Despite opening with a studiously camp comedic turn from Joey Phillips as an ardent young fan of Whale’s, this belies a sincerity and an aching loneliness that forms the undercurrent of the entire piece, and a sharpness of wit that Phillips holds back until the right moment. Indeed, it is a sort of humour in the face of grief that punctuates the production; Gelder’s droll soliloquys on the ‘lavender scare’ of Hollywood’s past eliciting both involuntary chuckles and a sense of sobriety.

Whale’s lasciviousness towards his visitors – particularly his slow chipping away at the resolve of gardener Clayton Boone (a quietly contained Will Austin) to pose naked for his sketch work – is a discomfiting alternative to his chipper persona, that feels as though it should engender more fear than it does. He is at once endearing and dangerous, frail yet powerful. The question of whether this would have been as easily brushed off were his chosen targets women, or anyone less than entirely able to physically fend him off is one that flickers constantly in the background, vaguely out of focus. But Russell Labey directs this balance well, interlacing Whale’s increasing desperation with flashbacks to his first love, and experiences in the trenches of World War I. Though poignant, these exchanges are at times jarring, perhaps because Louise Rhodes-Brown’s projection design does not always sit fully at ease with the flow of the piece.

Will Austin is a real find, and a wonderfully studied restraint to counterpoint Gelder’s frenetic grappling with his illness, and his control of those around him. Boone is, in point of fact, perhaps the more interesting character, as little to nothing of his own background is laid out. Across the hours, we come to understand the experiences that have formed Whale, but Boone quietly gets along with life in Whale’s world, only occasionally cracking open the barest of hints at his past and, even when pushed to the very limits, refraining from the violence that his purported life in the marines might lead you to believe lies just beneath the surface, and that his physicality would so easily allow for. In transpires that, in truth, Whale is his own greatest danger.

Though a slow burn, Gods & Monsters is a strong ensemble piece, and Gelder’s raging against the dying of the light is as nuanced and faintly ridiculous as you could hope. Don’t go in search of Frankenstein’s monster – though Hollywood anecdotes do make their way into the mix – but instead the reality of what it meant, and still means, to be gay in an unaccepting society, to be ill, to be slowly stripped of your memories and the ability to make the work that tells you who you are.