I wrote this on my phone on February 26th, tucked into an armchair in the lee of the stairwell at BAC, just before seeing Rove. It was a totally ordinary night (aside from the fact that I was actually early enough to sit and write something), and I had no particular reason to be pondering the building’s place in my heart, but I was…

A friend asked recently what home meant to us, and I didn’t have a place. But familiarity breeds comfort and maybe if I have one it is this space, the things that have happened to me here. I’ve laughed, cried, bared my soul and been drunk, and I know that every time I see this mosaic floor I will be somewhere that knows me. Home isn’t a place that you know, really, is it? It’s a place that knows you. I recognise Pete who stands at the bottom of the stairs, I have a favourite bathroom stall, favourite chairs, I love playing Pucket* – I’ve learned it from strangers while waiting for a show to start, then taught it again to others. Everything here is familiar, and comforting. But it’s a place that has known me, in almost all the stages of my life since I moved to this city. I’ve carried a heavy heart around it and sat in the dark and run up the stairs. I’ve lain on a bed, crawled through a tunnel of sheets and held hands with a stranger. Been sandblasted by music and left in silence. I’m never afraid to come here by myself. And whenever I’m here, I know I’m not supposed to be anywhere else.

March 14th. I’m working early tomorrow morning and should by all rights be at home on the sofa but after a 24 hour saturation of images of BAC being consumed by flames, I need to see it, to touch it, to be reassured by it. Walking up the hill I wonder when I’m going to notice a difference. When is it going to look different? Smell different? At which crossing is it going to cease to be the BAC of my memory & become the BAC of now; damaged and broken?

I think maybe I imagine the smell of burning. It mingles with the smell of Saturday night – takeaway and perfume.

A man in a kilt is pleading with someone on the phone. The air smells cold. Just cold.

An emergency vehicle and a traffic diversion still in place. Scaffolding fingers reach out towards the street.

I can’t see it in the dark – the yawning gap in the middle, where the Grand Hall ought to be. The security light is blinding. It could still be there, behind the scaffolding. Keeping its peace in the dark. A fireman passes in front of me and I pause before going in. Surely this is where it changes. The doors are thrown open. Probably to get rid of the smell inside, but feeling more like open arms. I smile at the box office staff. Pausing too long. On any other day, I’d probably look odd. But they return it in understanding. I’m glad you’re still here. Me too.

Then I’m inside with the bees beneath my feet and the bar is full, music is playing and every table is impossibly, hopefully, wonderfully adorned with a single fresh daffodil. I confess that’s the moment where I give myself over and have a little cry.

Enfolded by a sofa, it’s easy to pick out the staff – huddled in groups looking exhausted, somewhat baffled, but relieved just to be here. Myself and Rosie (who does work here) occasionally well up as we nurse our drinks and a sense of disbelief. That a building that survived 120 years and two world wars was taken down in an hour. That they’ve had offers of support from every possible level of the community, from the pub across the road to West End venues. Apparently people keep wandering in the doors to tell those on box office and front of house just what the building means to them. They’re hearing more stories than they could ever have gathered by launching a campaign asking for them.

People aren’t fond of BAC. They love it. With an absolute ferocity. Because it is a building – where they’ve made work or gotten married or met someone or heard something wonderful – and because it isn’t; it’s people, an ethos and an artistic mission, it’s bravery and generosity and open arms. 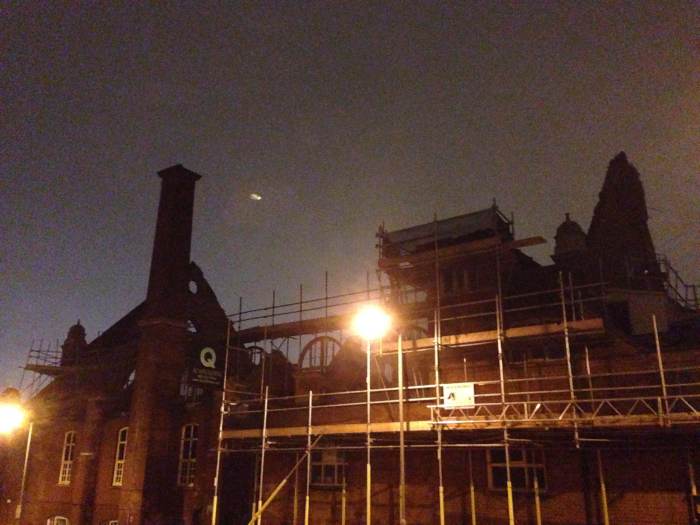 I went tonight because I needed to be there. In this place that feels so much like it knows me. What I didn’t expect was to leave feeling so much hope. Everyone is exhausted and shocked and, frankly, taking it moment by moment. To Rosie, everything they find out they haven’t lost is currently a victory. But for an organisation that watched its home go up in flames the day before, there isn’t the faintest sense of defeat. Just that of a steep upward battle ahead.

I feel, afterwards, as though I can bear to look at it, so I walk a little way down the road. No tears this time. The fire’s done; the hall that I only once set foot in, just a few weeks before, marvelling and snapping photos of its intricate ceiling, is gone. The surviving gables clawing at the skyline feel only as though they are waiting for something to rise up in its place.

At the risk of doing phoenix metaphors to death, I’ll borrow instead from Kate Tempest;

It only is until it’s not.

BAC  still is. It belongs to everyone who works there, who loves it, who has ever walked through those doors. We decide when it’s not. And that sure as hell isn’t now.

You can donate to BAC here, and buy tickets to currently scheduled upcoming shows here. If you can, or know of someone who can, offer direct support, please email davidj@bac.org.uk