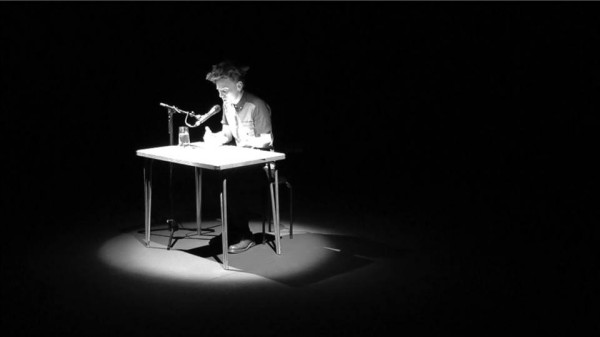 It’s Halloween and I have a perky pseudo humorous intro to this all planned out when I sit down in a room possessed of a remarkably oversized bed (I am disappointing and sit on the available chairs) to speak to Chris Brett Bailey. Because being pithy is easy and lazy and Chris’ hair does make him look like a Tim Burton character. But fuck that. Now we’re talking about form and death and meaning and feeling lost in a mire of popular culture and I know, inside I know, that I’m here to be sandblasted in an hour or so – and I give over to it.

Because it is a big ask. Turn off your laptop. Travel across town in the rain. Give me 12 quid. Be on time. Turn your phone off. That’s a lot to ask.

Did you know Doritos can be used as kindling Like look I re-drew all the Disney princesses but with normal waistlines Fave look at my Halloween costume someone stole our pumpkins what bastards COME TO MY PARTY NEXT WEEK PLEASE Going have you seen that Richard Ayoade interview yet LOOK AT MY LUNCH here’s why I think you should see Horns it’s really not that bad LISTEN TO THIS SONG gamergate gamergate ebola ebola spreading ebola appeal ebola fears humorous riff on news depiction of ebola Like ebola costume is it too soon WE BARELY KNOW EACH OTHER BUT I’VE INVITED YOU TO MY BIRTHDAY Read 18:43 no reply don’t you know what this meme is it’s been around for at least a day I FAVE ALL YOUR TWEETS puppy video yes Farage is still racist look Benedict Cumberbatch is wearing a feminist t-shirt doesn’t the world feel better now COME SEE MY PLAY Maybe

A boy a man a person a mic a voice a stack of papers a buzzing.

And that’s why I’m seated at a desk and not moving around, and yes it is easier to read it than do it memorised, but I can do the whole thing now, I can do it without looking down at the page, and there are sections where I am doing it off the page, but in that chapter specifically when I’m doing the stuff that is narrative based, I’m doing it so you don’t look at my eyes, so you don’t see my facial expressions, so that you can experience it like a sort of film that happens two feet in front of your face in the darkness.

And I want to be the only damn person who writes about this and doesn’t make cultural references and I desperately want to think of anything but anything but Ginsberg all I can think of is Ginsberg and Howl and how everything about it is a cry not of anger not of resignation but a scream of absolute rapture at the ferocity of being alive at how utterly beautiful this language is that we’ve made for ourselves and here is this show that has sacrificed itself utterly to that language that’s all it is surrounding, enveloping, encompassing and lapping at us with a thousand tongues and

I am very, very nervous tonight because it’s the press night, and I’m a very nervous performer anyway, and I start to sort of go into energy saving mode about 10 hours before the show and none of my friends want to be around me, and I am normally much calmer than I am now, I’m very tense.

So being interesting or being cute or being fun; it’s not enough

the non-sense of it